“Who looks outside dreams; who looks inside awakens.

“Even though the reality of the Self has been stated in many ways, it remains untold. The self is known only by Experience. That Experiential Awareness of the Self is prevented by the mind due to the firmly established conviction that “I am the body, ego/mind”.

When reading any of this material you are best advised to look to the implied meaning of emphasised words and not merely read the word as it is used in common speech. Mysticism has always demanded penetrative insight – almost out of perversity – to goad the enquirer to look deeper.  It, therefore, takes a little time and application to understand how the term Consciousness is used in mysticism, particularly if this is unfamiliar territory. You are advised to forget what the term has come to mean in neuroscience, medicine and psychology and in modern parlance that assumes complicity in a superficial philosophical view.  In Mysticism the word Consciousness has a more elusive and far more profound meaning and in respectful deference to all Mystics, they did get there first.

The nature of Consciousness as the term is used in mysticism is not an idea that can be grasped merely by reading an article or even a book or two.  It is a concept informed and corroborated by experience that has to be harvested over many years.  It is a concept that eventually penetrates everything we think we know.  Neither is its nature a question of opinion or belief in something vague or speculative. Consciousness exists independent of the existence of any animated life form.  Consciousness, as realised by mystics, is a fundamental aspect of the cosmic matrix, as real as the material that forms the universe. It is not an imagined Idea. This is not intended to sound like fundamentalism though I accept that at first, it may do so.

If you have the time to read and reflect on the content of this blog, it will become apparent that the way Consciousness is defined in mysticism dramatically alters the way we perceive life.  When we fully integrate this concept into our notion of existence it impacts everything. It does this by profoundly reorganising our Conceptual Hierarchy forcing us to re-examine ideas modern society considers primary and inviolably sacred and yet which are, when seen from a metaphysical point of view, actually spurious. The Mystic (and the Yogi) eventually come to live in an entirely different and unconventional conceptual reality; one that manifests what we all desire – a deep sense of happiness and well-being.  We each seek this gem even if we are not aware that it drives us.  Worldly desires are the carrot dangling on a stick that we fruitlessly chase in pursuit of enduring happiness and contentment until it occurs to us to ask, “Who is holding the stick”.  Were that not so then all these words would be so much idle rhetoric.

It would though, be naïve to presume that we could all suddenly be happy simply by adopting an idea that sages have pondered for centuries.  What most of us do not realise is that we have been duped, even brainwashed, by the prevailing ignorance of a sophisticated yet Spiritually bankrupt society into a way of thinking about life that ensures that an enduring experience of happiness and well-being is actually impossible.  In 21C society, rationalism, and its bedfellow Atheism, dominates as the prevailing mindset; a mindset that considers Spiritual Intuition as archaic and irrelevant in the search for answers to the mystery that presents as Existence.  This is largely because Spirituality is seen as being synonymous with a Religious Belief when religious belief is a social phenomenon and another thing entirely.  We have learned to be extremely mistrusting of subjective experiences as being wholly unreliable as a basis on which to construct theories that challenge this normality even to the extent that we label them illness or psychosis when in fact they are often glimpses of a Spiritual Reality.  ‘Enlightenment’, Swami Bawra once told me, ‘is mastered madness’.  To walk the path is to walk a knife-edge and any peace manifested this way does not materialise through feint endeavour.  It seems to me fundamental that we learn to recognise the difference between Delusions (or in extreme cases Spiritual Psychosis) and Stable Insight if we are ever to navigate what is a very mysterious ocean.

It has always been something of a mystery to me that in its search for an explanation for Consciousness contemporary researchers focus on the Illusory Effect (the complex activities of Mind) and ignore as being irrelevant any explanations for the origins of Consciousness offered by mystics, choosing to see any insight they can offer as being merely Religious and rooted in blind faith.  This is a position informed by a lamentable lack of Profound Understanding.

If we really wish to understand the nature of Consciousness we have to set aside our empirical criteria for investigation and accept that our body and mind must become the laboratory and in faith accept that Subjective Experience will finally deliver the singular insight (Knowledge from whence all else proceeds) that is Reality – Consciousness.

Long before scientific rationalism dominated our thinking Mystics observed that Consciousness did not originate in the brain; rather that the brain is a kind of port through which Consciousness, with its own unique properties, shines and in doing so gives rise to self-awareness and the phenomenon that is animated life and in a material component (Nature)  that is otherwise inanimate and insentient. 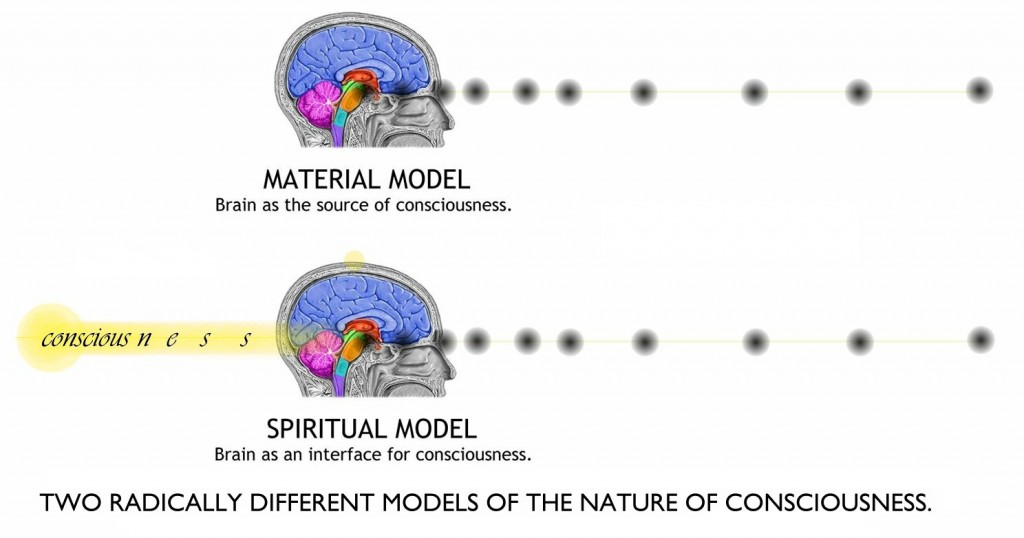 The first of these diagrams is the empirical version that yields only unresolved complexity.  It offers beguiling explanations but not truths.

The second depicts the mystical view, which is that Consciousness itself is immaterial in every sense and not generated by the biology we take to be ‘us’ as thinking beings but rather causes that biology to manifest thinking beings.  From this singular understanding proceed more complex models and concepts.  Without this insight, ideas are merely bits of discordant information floating unrelated in an endless void – ideas only as profound as our personal ability at intelligent complex thought.  Intellectually brilliant but fundamentally flawed.  The property of Insight, (as distinct from learned academic material) is distinct in that what is revealed is not personal – it is not MY knowledge.  It is there to be Seen by anyone who can look without Egocentric interference.  Hence the term Seer.  One who Sees Essential Knowledge.

The ability to observe this phenomenon takes years of single-minded practice but it is not impossible and neither is it pointless.  Mastering this process is not for nothing; it has a pay-off that is so profound that it is spoken of with deep reverence.  In resolving this conundrum we come to experience an enduring state of sublime happiness or bliss, (our true nature) that is so profound that it eradicates all suffering by bringing the struggling illusory Mind to complete stillness.

Millions have touched this state by accident and have failed to appreciate the profound nature of the experience.  But even without understanding, the experience changes everything for the individual.  Where it is fleeting we will speak about it for the rest of our lives as a moment when we touched everything; understood everything; even merged with God.  Where it is prolonged and without mastery it brings a peculiar kind of madness and a unique kind of suffering.  Understanding this process and its implications sets us right.  According to mysticism realising the true origin of Consciousness is actually the pinnacle of human endeavour because Consciousness is what I Am.

If there is a goal to be reached it cannot be permanent. The goal must already be there. We seek to reach the goal with the ego, but the goal exists before the ego. What is in the goal is even before our birth, that is, to the birth of the ego. Because we exist the ego appears to exist too. If we look on the Self as the ego then we become the ego, if as the mind we become the mind, if as the body we become the body.

It is the thought which builds up sheaths in so many ways. The shadow on the water is found to be shaking. Can anyone stop the shaking of the shadow? If it would cease to shake you would not notice the water but only the light. Similarly, take no notice of the ego and its activities, but see only the light behind. The ego is the thought `I’. The true `I’ is the Self.

Q: If it is just a question of giving up ideas then it is only one step to realization.

A: Realization is already there. The state free from thoughts is the only real state. There is no such action as realization. Is there anyone who is not realizing the Self? Does anyone deny his own existence? Speaking of realization, it implies two selves – the one to realize, the other to be realized. What is not already realized is sought to be realized. Once we admit our existence, how is it that we do not know our Self?

2 thoughts on “MAKING SENSE OF CONSCIOUSNESS.”