Key to understanding the function of mind.

Sri Ramana: “I usually have no thoughts.”

Sri Ramana: “Then I have thoughts.”

Q.  “And when someone asks you a question?”

Sri Ramana:  “Then, too, I have thoughts when replying, not otherwise.”

Q.  “How can I keep the idea of that real state always before me?”

Sri Ramana: “Because you think you are a body you are not able to keep that single idea, you are not firm! The idea that you must go to Tiruvannamalai and see Maharshi is only a function of the intellect. Really no help is required. You are already in your original state; how can anyone help you to arrive where you already are? The help given is only to clear out your wrong notions. The great men, the gurus can help only by removing the obstacles in your way. A child and Jnani are in some ways similar*. The child ceases to think of incidents after they have passed off. Thus it shows that they do not leave deep impressions on the child’s mind. So too with a Jnani.”

* And Jesus said: “Truly I tell you, unless you change and become like little children, you will never enter the kingdom of heaven. Matthew 18:3

Swami Bawra said. “If you do not have Heaven on earth then you will certainly not have it when you die.”

Ramana Maharshi said, ” Control the mind and even Hell will be Heaven to you.”

One enters Heaven when one is in a state of BLISS.  This happens when Mind becomes silent and the Self shines uncorrupted by Ego.  It has nothing to do with believing anything at all.  Heaven is an experiential state of Being not a place.  Belief, which depends on the constant reclaiming and affirming of an illusory idea is actually generating the very mental noise that makes the emergence of Bliss, and therefore Heaven, improbable.

“Your nature is Peace and Happiness. Thoughts are the obstacles to realisation.  One’s meditation or concentration is meant to get rid of obstacles and not to gain the Self.”

One cannot gain what one already has.  The point of practice is not to aquire something.  Ego acquires.  If Ego tries to acquire Bliss then Bliss will elude the seeker forever.  Surrender – the unique act of letting go – is a fundamental Cosmic Law that makes transformation possible.  We cannot become free if we cling to what imprisons us.  Hence non-attachment brings peace.  Though this seems to be a really simple statement it actually expresses the key to understanding a process. We are Bliss.

Spiritual Practice is practice at letting go.  It has absolutely nothing to do with being part of anything or belonging to anything or performing tricks.  That is the business of Ego/Mind.

For technical reasons this Video has been reposted on 25 April 2014.

“One way to get free of attachment is to cultivate the witness consciousness, to become a neutral observer of your own life. The witness place inside you is simple awareness, the part of you that is aware of everything — just noticing, watching, not judging, just being present, being here now.

The witness is actually another level of consciousness. The witness coexists alongside your normal consciousness as another layer of awareness, as the part of you that is awakening. Humans have this unique ability to be in two states of consciousness at once. Witnessing yourself is like directing the beam of a flash-light back at itself. In any experience — sensory, emotional, or conceptual — there’s the experience, the sensory or emotional or thought data, and there’s your awareness of it. That’s the witness, the awareness, and you can cultivate that awareness in the garden of your being.”

“Mind alone is the cause of man’s bondage and freedom.” Amritabindu Upanishad

Many years ago I read a book by Jane Roberts called the NATURE OF PERSONAL REALITY. Jane Robert channelled a source called Seth. Regardless of what you might think of channelling, at some point in her delivery Seth addresses why anyone would want to seek Nirvana. Why anyone would want to destroy the Ego and lose the experience of enjoyment?  He declared it to be folly.

At the time I was quite affronted by this statement and dismissed his stand.  I was after all on a mindless quest to obliterate my soul so why would I take note of such a statement?  It would have been good to take heed because it is a searching question.

“Birth and death are only ideas. They pertain to the body or the mind. The Self exists before the birth of this body and will remain after the death of this body.”  Ramana Maharshi in Talk 487.

Samkhya Philosophy is described as ‘that knowledge knowing which does away with all suffering.’ And this is the key to understanding the nature of this admittedly absurd pursuit.

In a sense the undertaking is a kind of trade, though that puts it very crudely.  One is trading one’s Ego for Bliss – not happiness, BLISS, but that is also a crude oversimplification.

Though we might enjoy moments of happiness when things are going our way; when we have our health, enough money, enough food, good company, a new something or other, but this is happiness and not Bliss.  There is no doubt that life does have a certain charm at times but there are also times when life is a torment.  Technological Civilisation with all its benefits (whatever they might be) is a recent state of affairs but such sophistication is as thin and fragile as gossamer and can be swept away by a gentle breeze.

Jesus warned us, “Lay not up for yourselves treasures upon earth, where moth and rust doth corrupt . . . For where your treasure is, there will your heart be also.” Desire creates your universe; that’s just the way it works. Ram Dass.

Suffering is never so far away, as the Buddha declared. (Read the story of the Buddha and the Black Mustard Seed.) And for so many reasons suffering is beyond one’s control.  It is in those dark moments that we question the nature of existence and how we might be freed from suffering.  Ask any survivor in the current war zones in the Middle East right now what they would do to be free of suffering.

It is our habit to look to the world and circumstance to satisfy this desperate need but any solution obtained by materialism can only ever be temporary.  And this includes joining or belonging to groups or movements that promise Shangri-La by virtue of being one of a chosen few.  It is a fact we either accept as being the way it is or we ask that profound question, “Is there a way to be free of suffering?  And therefore how does life work if it is not to be taken at face value?”  In this pursuit there is a process and it soon becomes apparent to the open mind that suffering cannot be eradicated by any material means and that suffering is a natural part of the human condition.  It takes a wise soul to point out that to have any impact on the nature of suffering we must look inwards in a very particular way.  And thus there starts the journey that has no destination.

Hence, “There are no stages in Realization or degrees in Liberation.” Ramana Maharshi

No thought that arises as Mind is any more or less profound than any other thought despite what each promises – even those thoughts that are pregnant with charm are insignificant.  Everything we think is merely a dark cloak that conceals the Self.  Nothing we can think will liberate us, no matter how profound.  Only when thoughts fall silent are we approaching the true nature of what we are.  Nothing else matters……….

I needed to know this even before I learned to speak!

D.: Cannot samsara (Literally means: journeying. [cycle of birth, death, and rebirth]) be got rid of by any means other than making the mind still?

M.: Absolutely by no other means; neither the Vedas, nor the shastras (In essence, the shaastra is the knowledge which is based on principles that are held to be timeless.) nor austerities, nor karma, nor vows, nor gifts, nor recital of scriptures of mystic formulae (mantras), nor worship, nor anything else, can undo the samsara. Only stillness of mind can accomplish the end and nothing else.

D.: The scriptures declare that only Knowledge can do it. How then do you say that stillness of the mind puts an end to samsara?

M.: What is variously described as Knowledge, Liberation, etc., in the scriptures, is but stillness of mind.

D.: Has any one said so before?

M.: Sri Vasishta had said: When by practice the mind stands still, all illusions of samsara disappear, root and branch. Just as when the ocean of milk was churned for its nectar, it was all rough, but became still and clear after the churn (viz., mount Mandara) was taken out, so also the mind becoming still, the samsara falls to eternal rest.

4. Is the state of ‘being still’ a state involving effort or effortless?

It is not an effortless state of indolence. All mundane activities which are ordinarily called effort are performed with the aid of a portion of the mind and with frequent breaks. But the act of communion with the Self (atma vyavahara) or remaining still inwardly is perfect effort, which is performed with the entire mind and without break.
Maya (delusion or ignorance) which cannot be destroyed by any other act is completely destroyed by this perfect effort, which is called ‘silence’ (mouna). 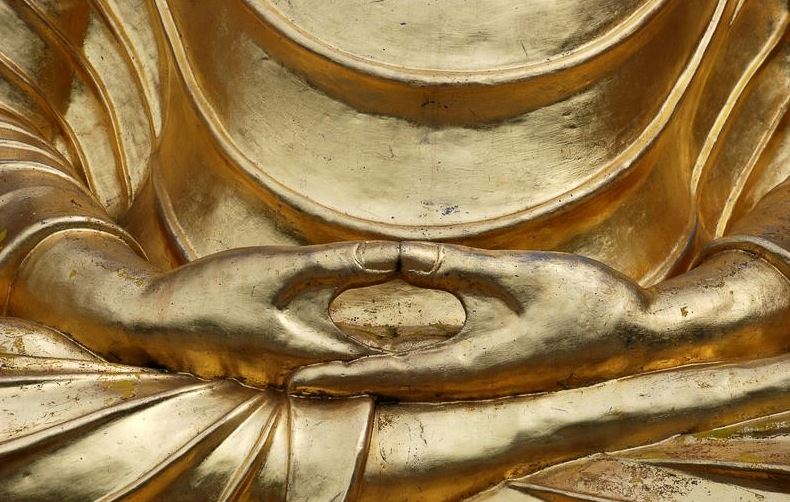 Control the mind and even Hell will be Heaven to you.

The question to ask is why that might be?

The difference between who you are and who you want to be is what you do.  It’s the simplest of truths but the most elusive.

Live in the Real with your intention focused on your Ideal.

It is the pure simplicity of this statement that gives it such weight.

“That which is not present in deep, dreamless sleep is not real.”