“If one’s mind has peace, the whole world will appear peaceful.”

The reposted video in the post above, ‘Swami Bawra speaking about Yogis and walking on water’ is shared here for reasons that will become apparent in later posts. Swami Bawra shared these stories with me many years ago but I never heard him tell of these saints openly in a talk until I came upon this recording.   In a world of hard nosed scientific realism this is a precious gem.

This is a word for word transcript of Brahmrishi Shri Vishvatma Bawra Ji Maharaj.

speaking on HATHA YOGA and YOGIS in a discourse on Chapter 6  of the Bhagavad Gita – Talk Part 2.

Part 1 can be viewed here:

... all are related with these. In our Hatha Yoga all must be, you know, special subject and you can describe, you can be master, and real yogi. If you can be master for that, of that, then you can be a real Yogi.  And [a] Hatha Yogi has great power. But that is related to material power.

One day I taught you that there was one Yogi, Hatha Yogi, and his name was Chan [Gyan] Deva in India then. He lived fourteen hundred years, okay, fourteen hundred years, old he was when Gyan Deva was born (0.42) in 500 years ago [he was]. There are so many other yogis too; they are living in India and they are doing.  I met one yogi and he was 300 years old and he was sitting, he was controlling his breath and I wrote this in my one book about his life. So there are so many Yogis still now in India.  They are, you know, living and so many years; maybe a thousand years old.  They are living in Himalaya and some other places too. (1.00) I met so many yogis in my life.

Once [when] I was [a] very young boy I was studying and doing penance; very hard penance and …… I was drinking only Ganges water. I was not taking any other thing. Okay. And I was living in Vindhyachal, that was a big holy place in Uttar Pradesh. One day [in the] early morning I came to [the] Ganges and I was taking that holy water because that was my food. And I was taking Ganges water twice.  Early morning and in the evening – twice a day. So there was only my skeleton only not flesh or any other thing. Okay. This is 1954. This is 1954.  One day when I was drinking water I saw a Yogi and he was standing on the bank of the Ganges river.  And he saw me and smiled and he called me, ‘Oh my boy.’

And he was sleeping on the Ganges water. And after maybe one hour and some one or two hour. And I was sitting and looking [at] him. And he was sleeping.  And you [will] be surprised and Ganges water was flowing but he was not flowing with water. He was sleeping there. I was stunned.  But after some hour he came out and he touched my head and he told me, “Oh my boy. You scared? Okay. Okay.”

And he do in this way, [holding up his hand in a reaching gesture] and got a book, a small book and gave [to me and said], “You are doing very hard austerity. Okay? I know, so I giving you this blessing. Take this book and one day you will be very learned person my boy.  And you will be great Yogi too.”

Oh! I was stunned. And he blessed my head and then blessed me and he told, “Go now.”

And then I went some extent and then I saw, you’ll [be] surprised when he touched my head, my head was up to here, [pointing to the bottom of his rib cage] okay, here.  He may be seven foot tall.  ?both of that too …. I remember still now my head was up to his this place, stomach only. And I am six feet and he was so tall person.

When I left him I went some extent I thought, because at that time (5.25) and [from when] he called me and when he allowed me to go, between those times I was spell bound.  I was unconscious. I was not in my sense.

And when I went outside and I thought, ‘Who is he?’

Then I got his book, whatever he gave me. Okay? And I pacified myself, okay, he is in the form of book. Okay.  I just held my heart and whole day.  Not only whole day.  So many days (6.28) I was thinking about him only.  I have seen such kind of yogi.  And I told some other person and they told there are so many yogis living in Vindhyachal.  This mountain is a very old mountain…….. “  talk continues…

A full word for word transcript of this entire lecture is available by email from malcolm@gaiatechuk.com.

There is nothing consistent about our feelings.  If we live out of or make decisions from our emotion, (non-verbal Mind/Ego) we will live life chasing desires as if in a boat tossed about on a stormy sea.  Only Bliss is consistent but Bliss is not an emotion.  Bliss is what shines when all else falls silent. And how do we know the difference between bliss and happiness?  Where there is Bliss there is no longer any longing and no longer any fear. 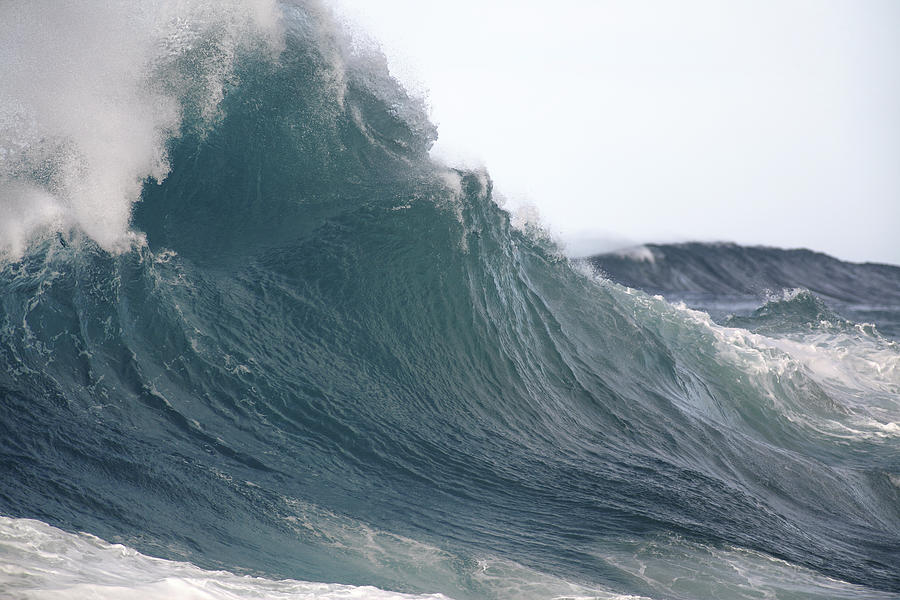 I added the Ramana Maharshi Quote and our discussion to my blog and thought I would send you the link because the distinction offered by Ramana is an important one.  Jnani is the path of Knowledge by which false understanding (ignorance) is stripped away. It asks ‘Who am I?’ As distinct from Bhakti which is the path of Devotion.  Our leaning toward one or the other is a predisposition in our Nature.

There are a handful of jewels that illuminate the path to emancipation beyond which nothing else is required.  We come with all the tools necessary to realise enlightenment.  A single idea defines the Nature of Reality.  ‘We are Consciousness’ .  That’s it.  That is the mystery.  But the realisation of the profound depth of this simple statement requires an inner condition, [Or you can say an inner stance – a way of being internally] or it cannot be a stable experience. 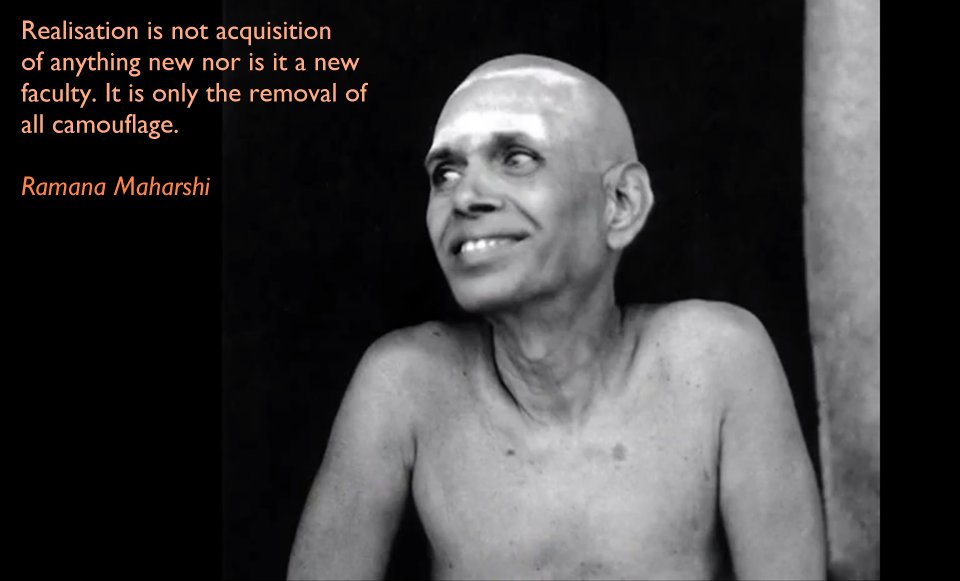 The most important thing to understand is that there is nothing to gain.  There is nowhere to go.  The path is only a process of removing obstacles to the realisation of that Truth.  By being a conscious being you are a channel for consciousness, Now, Now, Now.  It is there always in its absolute perfection at your heart (centre of your being).  All that is required for us to experience it is the sweep away Ego/Mind.   Ego/Mind is like a forest that stands between us and the rising sun.  There is no problem with the sun.  Only the presence of the forest blocks our view.  This understanding is a Jnani concept.  Two ways fell the forest – insight (knowledge) and devotion (complete surrender to God or Self.  And by this I do not mean the God of speculation that is a mental construct).

The result of rendering Ego/Mind silent is the experience of Bliss – a property of Consciousness.  It is ‘that peace that surpasses all understanding [1]’ about which all sages speak and which fuels what often becomes an Ego driven craving for emancipation particularly when emancipation is seen as a panacea for mental turmoil.  That Sublime Peace is always present but drowned out by Mind.  If encountered a devotional person will likely experience this Bliss as a love for God.  We can be an atheist (rejecting of a notion of God) or a believer (accepting of a notion of God) it makes no difference because both these are attached to the Ego/Mind and not Reality. When bliss manifests in experience, concepts are irrelevant.

Many people accidentally experience a Bliss State.  History is awash with them and profound as it appears at the time this is not the stable state enjoyed by Seers because Enlightenment is a dynamic not a passive state requiring the penetrative insight that prevails in Satwic Mind (a state of harmony, balance, joy & insightful wisdom).  It can be fleeting or last for hours or even days, but in the absence of any fine understanding or guidance the individual will usually becomes mentally unstable by trying to cling to the experience and all too often will be diagnosed as delusional or even psychotic.  This premature experience is not one to invite without access to a wise teacher.  If it happens then understanding its nature and cause is everything.

In 1988 I ran a meditation course in Surrey.  Nineteen people enrolled.  Before I started the first session I asked how many people were there because they had had what they would term a Spiritual Experience.  All but two or three hands were raised.  In those days I was nowhere near a reasoned explanation.

The clue as to why it happens, unbidden, lies in our devotional nature. And this is also the key as to why it is usually intentionally unrepeatable.  Many people who have ‘enlightenment’ experiences spend years trying to repeat what they think they did or make the experience mean something when it means nothing – except to reveal only that we are Consciousness.  Actually it was what they did not do that made it occur.

Essentially one is surrendering without realising it.  In a moment of ‘Grace’ (you can say) ones Ego is set to one side and The Self, Consciousness, God is momentarily revealed. Hence Ramana Maharshi said;

“The moment when ego is completely surrendered, the Self shines”

It is the Ego that wishes to repeat the experience.   It will fade as soon as the Ego asserts itself again – as my experience.  Quite often the experience is accompanied with tears of joy, and a feeling of complete devotion to God. The experience of the Self is beyond description and life changing.  In such moments there is no desire.  One is completely fulfilled – immersed in unconditional love.

But ultimately devotion is not enough.  Anything suppressed can reassert itself so one has to realise the true nature of the Self and remove all impressions (Sanscaras) to be a completely free Soul.

<[1] “… And the peace of God, which surpasses all understanding.” Philippians 4:4-7 (English Standard Version)

Your nature is Bliss.

Verse 24:  “By existing (irukkum) in their real nature which is Existence or Sat, God and souls are one substance (vastu).  Their adjunct knowledge or adjunct consciousness alone is different.”

Adjunct = a thing added to something else as a supplementary rather than an essential part.

‘The Moon Appears When the Water is Still.’  Reflections of the Dhamma.